Raymond Walters, or Ray as his friends called him, was born in Uxbridge on February 26, 1927. Even after his family moved to Toronto, Ray spent summers back in Uxbridge, working first at his grandfather Albert’s harness shop on Brock Street and later on nearby farms.

As noted in his obituary, “Always artistic, Ray painted two murals which won prizes in the Toronto Exhibition, prompting his teacher to suggest he go to art school.  His parents didn’t approve, saying he would only end up selling pencils on Yonge Street.  He studied art at Northern Vocational School (now Northern Secondary) under artists Larry Panton and Leonard Brooks and went on to a long career in commercial art as co-founder and president of Art and Design Studios (ADS) Ltd. on Merton Street in Toronto, retiring in 1995.  He also owned the Merton Gallery and ADS Film Productions.”

After he retired, Ray had more time to sketch and paint as well as piloting his float plane to the cottage near Minden, a rustic cabin on Redstone Lake in Haliburton, or to his fishing camp on Pody Lake near Hearst.  He died at home in Port Perry on June 23, 2020, leaving three sons, Kevin, Cameron and Christopher and their families.

In his obituary, his sons added a note:  “Charitable donations are welcome in Ray’s memory to The Arts and Letters Club of Toronto Foundation to assist youth in the arts.” 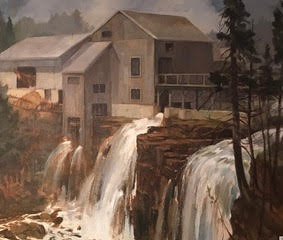 I interviewed Christopher to learn a bit more about Ray and why the three brothers decided to set up what will be the first memorial fund for their father.

“None of us are artistic,” Christopher said.  “My brothers are engineers.  They live in the GTA.  I’m in communications with the government in Ottawa.  But we all have an appreciation of the visual arts.”

After a stint at Saturday Night magazine, Christopher took a Master’s degree at Cambridge University then worked in London, UK for 10 years.  His knowledge of that city led him to write a book, London Eh to Zed: 101 Discoveries for Canadian Visitors to London, published in 2015 by Dundurn Press.   Although not a visual artist himself, having a father who was an artist contributed to Christopher’s love of collecting art.  “I’ve never seen an auction I didn’t like,” he said.  “And I’m running out of wall space.” 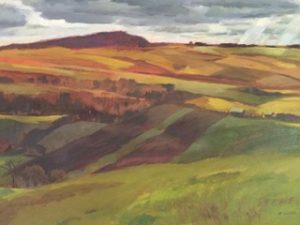 He said his father always had an art studio in the house when he was growing up.  “When he moved to Port Perry, my dad tore up part of the garage to create a studio including part of the roof so that he would have natural light in the studio.”  Ray loved to create art outdoors whenever possible.  “He was a great fisherman and liked to go flying so he always took his rod, easel, and paint set, too.  He would take annual sketching trips inspired by the lifestyle of the Group of Seven to places like Collingwood or Marmora.”

Christopher also remembers how his father worked art into other trips.  “He and my mother went down to Arizona about 15 years ago.  Around Sedona he was blown away by the colour of the rocks and the landscape.  Dad drove mom and  his friends crazy because where anyone else would just stop and take a picture of the landscape, he’d stop the car, take out his pastels and sit sketching for forty minutes while the others would be left to wander or go shopping until he was done.”

Christopher said his father was a proud Life Member (45+ years of membership) of The Arts and Letters Club of Toronto.  “I brought my father to his last Boar’s Head dinner.  He was 91 at the time and I didn’t want him driving to Toronto and back.  He always had the Club newsletter on his table.  I read the LAMPSletter, too.” 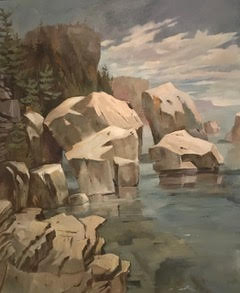 When their father died, Christopher and his brothers thought it would be an appropriate way for those who wanted to remember Ray to make donations to the Foundation.  “We did some research to see if there was a Foundation associated with The Arts and Letters Club.”  Donations made by family and friends in Ray’s memory are put into a fund with the goal of setting up an award for young artists.

“My dad loved to paint.  Landscape was his strong point.  It would be nice to support artists who had a similar love of painting Ontario.”

1 thought on “‘My Dad Loved to Paint’: An Award In Memory of Ray Walters”