It’s been 14 years since the picture above was taken.  Sadly, due to corona virus we couldn’t gather a special group of women artists together to celebrate another milestone.  This year, 2020, marks the thirty-fifth anniversary of women being admitted as members to The Arts and Letters Club of Toronto. It took a combination of determination, changing times, and a protest by one of the first female members to change the tide and make the Club open to artists of both sexes.

The first women members, known as Charter Women, were a mix of visual artists, vocalists and musicians, art critics, costume designers, writers, interior designers, teachers, architectural conservators, and stage performers. If you want to know more about these intrepid women, visit our archives. Their names and photograph also hangs on the wall, just inside the entrance of 14 Elm Street.

Other arts organizations such as The Women’s Art Association of Canada (1907), the Heliconian Club (1909), and the Alumnae Theatre Company (1918) were established as places for women artists in Toronto long before the Club admitted women members. Even University of Toronto’s Hart House admitted women 13 years before the Club did.

Women were occasionally allowed to visit as guests for evening events or participate in Club shows, including the Spring Revue, but they could not join the Club or attend every event. Things came to a head in 1975 when artist Anne Lazare Mirvish organized a small but mighty protest, complete with signs crafted at Honest Ed’s, after she was told she was not allowed to attend a luncheon talk her husband Ed was giving at the Club. The three-woman protest picket outside 14 Elm Street made the newspapers.

After Anne’s protest, the question of adding women members was raised again and again over the next ten years. It caused a stir among the membership. Some men said they would resign if women became members and, indeed, a small number did resign. Others passionately supported the idea. Member Bill Duthie expressed his concern: “[There was] little doubt that women’s superior acumen and intuition would, in the end, take over the club, leaving the male members with no opportunities to develop their limited skills.”

On 19 February 1985, Club President Kenneth Jarvis and his executive put the issue to the members. The vote was 64 to 38 in favour of admitting women. So ten years after Anne Mirvish’s picket protest the first women were admitted as full Club members.

Just like we do today, each new member was introduced in the Club’s newsletter, the LAMPSletter. The first woman Club member was artist Aileen Morrow (1915-2005), pictured left. Her bio, from the August 1985 issue of 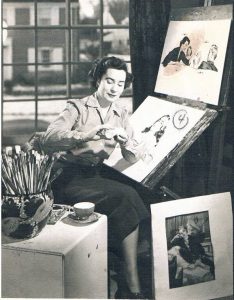 the LAMPSletter noted:  “Aileen Tyrrell Richardson Morrow, professional, is the first woman to join the Club, but she is no stranger having had a solo exhibition in the Great Hall that drew an overflow audience on opening night. She is a past president of the Heliconian Club and the wife of our Past President John Morrow.”

Within just two years, almost twenty percent of the membership was women. Today, more than half our membership is women.
******
In 2015, I organized a thirtieth anniversary celebration for the Charter Women in our Great Hall. In preparation, I asked a number of the women to recall their early days as members. Here, in their own words, are excerpts of their memories of joining the Club:

“Why did I join the Club? Short answer: Because I could. Long answer: One of our neighbours happened to be Peter Hermant who was a member of the Club. He knew that as an artist I would love it. He sponsored my membership as soon as women started to be accepted in 1985. At Members’ Dinners I was frequently the only woman; a certain member, long gone, had his table and I quickly learned I was not at all welcome there. But, of course, there were other friendly and hospitable members. But, those few members who voted against admitting women left or learned to accept us and put us to work. Pat Fairhead and I were elected to the Board (Executive) right away.”
Zora Buchanan

“Painting is often a solitary pursuit and the club offers visual artists a place to show their work and interact. Although many alternatives now exist to that end in Toronto, none have as inspiring an atmosphere, as steeped in Canadian art history. Thinking back … I remember how we were all reading Betty Friedan and were caught up in Trudeaumania … I am truly thankful that we still have something here as stellar as the A&L.”
Mary Tuck Corelli

“My first visit to the club was the 8th of April, 1981. I know this fact as I was presented with a copy of a book, J.E.H. Macdonald, Sketchbook, 1915-1922 signed by Raymond Peringer and Hunter Bishop, the Archivist at the time. Inside is a small piece of paper with a signature of J.E.H. Macdonald. What a treasure! Raymond asked me to join the club; he and Chris Adeney sponsored me and the rest is history.”
Mary George

“I was in the shows from 1980 to 1985. In those days they were written mostly by Pat Hume who wrote three 20-minute sketches. And in each sketch were massive amounts of dialogue, and many, many songs, written by Jack Yocum and some by Wilf White. These sketches were a nightmare to memorize. Sis Weld and Jean Edwards were in those shows at that time and we remember them with fondness and the odd shudder. My husband Peter had been a member of the club since the seventies, so I was around there a lot anyhow. So it wasn’t a case of deciding to join the club; it was, in fact, a huge honour when I was included in the original group.”
Katie Hermant

“I spent a great deal of time [at the Club] with my former spouse and enjoyed conversations with interesting people. It was a normal progression to join when the opportunity was offered. Having tried my hand at painting I quickly realized I am an appreciator not a doer and what better place to enjoy painting, music and theatre than the club. My years at the club have introduced me to many fascinating people and allowed me to make many new friends.”
Mary-Jane Large 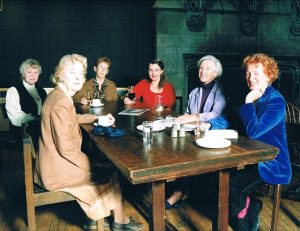 As the Charter Women note, not only did they flourish as artists, but their talents and skills were put to use serving on various committees, helping with events including the annual Spring Revue, art exhibitions and musical concerts, as well as serving on the Club executive as directors. Two Charter Women also became Club president: our first woman president, Margaret McBurney from 1998 to 2000 and Diane Kruger from 2010 to 2012.

In preparing for the celebration five years ago, I asked David Franco for his perspective. Franco was Club president from 1986 to 1988, soon after the first women became members.

“Looking back after all these years the arguments against the change seem downright silly and lacking in vision,” Franco said. “Those of us who supported the right of so many talented and creative women to join the Club family knew they would bring new life and vigour to the Arts & Letters experience. That quickly proved to be true.”

Today it is impossible to imagine the Club without women. And celebrating our Charter Women as fellow artists, committee chairs, executive members and friends is a real privilege. These women are true trailblazers.

At the end of the thirtieth anniversary celebration, an award honouring the Charter Women was set up through The Arts and Letters Club of Toronto Foundation. It is hoped that the first award will be made in 2021. 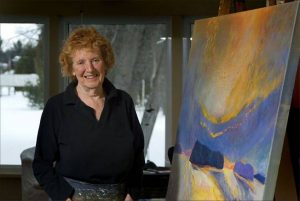 Photo credits:  The Arts and Letters Club of Toronto archives

4 thoughts on “Happy Anniversary! The Story Behind The Club’s Charter Women and The Award in Their Honour”