Fiona Hamilton of Fredericton, New Brunswick is the first winner of the The Arts and Letters Club of Toronto Foundation’s Award for Architectural Conservation.  The award was created in partnership with the Royal Architectural Institute of Canada Foundation (RAICF) was presented at the RAIC’s 2022 Virtual Conference on Architecture in June 2022.  It recognizes Richard Moorhouse for his leadership as the Founding President of The Arts and Letters Club of Toronto Foundation, and former Chair of the National Trust for Canada and in appreciation of his life-long contributions, both as a professional and as a volunteer, to the field of heritage conservation.

As stated in her application for the award, “The escalating loss of Canada’s old and historic building stock, due to needless demolition, is reason enough to advocate for greater awareness around these resource intensive buildings. Historic architecture not only act as neighbourhood and community landmarks, but carry immense cultural, historical, and environmental value and can been seen as an opportunity to utilize and retain our exiting-built environment.”  Hamilton’s Master of Architecture design thesis, from Dalhousie University focused on identifying and tailoring adaptive reuse methods of small-scaled nineteenth and early twentieth century industrial architecture in small urban centers.

“The escalating loss of Canada’s old and historic building stock, due to needless demolition, is reason enough to advocate for greater awareness around these resource intensive buildings.”

Hamilton wrote that she came to understand the importance of architectural conservation when she was working as a development planner and was reviewing a demolition application for a heritage building. While the structure was recognized and listed as a heritage asset, it was not designated, leaving it vulnerable to destruction and erasure.  “This will always be a moment that will stay with me,” she wrote, “knowing that my name is stamped on a demolition permit of a beautiful historic building whose opportunities went unrealized. There is a need for more awareness, not only to saving our cultural and built heritage, but also reducing our environmental impact by saving and reutilizing existing building and understanding their significances to society.”

Between 2019 and 2020 Hamilton completed a year of architectural postgraduate studies in Scotland at the Glasgow School of Art (Mackintosh School of Architecture);  her research dissertation, under the guidance of Glasgow City Urbanist, Brian Evans, focused on The Everyday City Glasgow: How the Built Environment Impacts Urban Mobility and the Successes of an Age-friendly City. “This became an exercise in understanding how modern society intersects and interacts with the historic medieval city.  Studying abroad not only expanded my architectural perspective but enlightened me to ways that other cultures build and maintain a vibrant public life in the old city. These accumulated experiences have solidified what I deem as important in a well-designed space: the merging of a city’s urban needs with its unique architectural characteristics.” 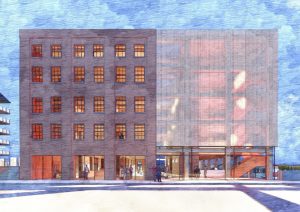 To prepare for her thesis year, Hamilton engaged in a range of subjects focused on heritage conservation. She enrolled in an architectural technology course which dealt with issues of historical authenticity, sustainability, and relevant principles of practice as they apply to adaptive reuse of heritage buildings in Nova Scotia. She pursued the investigation of historic conservation methods and procedures in Quebec City in relation to a course focused on the history and theory of urban design.  She also conducted studies which involved the life cycle analysis and carbon emission calculations of existing and heritage buildings. “My analysis presented an estimate of carbon emissions which would have been released into the atmosphere at the time of the building’s construction. Confirming that our old and historic structures are resource intensive and that historic conservation and building reuse alone can be considered a positive climate action.”

In 2021, Hamilton completed an architectural co-op placement with Goguen Architecture Inc. in Fredericton, who, at the time were involved in several heritage related projects in the province of New Brunswick. While working with the team she was exposed to the practices, procedures and methods of working as they relate to the use of minimal intervention to conserve and revitalize heritage assets. This work included being exposed to the recording, evaluating and offering potential interventions in line with the strengths outlined in the standards and guidelines for the conservation of historic places in Canada.

In addition to the Foundation award, Hamilton was the sole student recipient in the architecture category of the artsnb Arts Scholarship 2022, which recognizes individuals in New Brunswick as having outstanding potential as an artist. Additionally, in August 2021, she received a Bruce and Dorothy Rossetti Scholarship to travel and carry out thesis related research. The topic, likely inspired by her exposure to modern adaptations of nineteenth century buildings in Glasgow, involved an in-person investigation of historic industrial architecture which had been adaptively reused in Montreal and Toronto.

“There are opportunities to bring old buildings back into a new history rather than ultimately wasting an opportunity that would allow for the reintegration of life into a forgotten piece of time.”

Her background in both architecture and urban planning provided a strong framework for her design thesis:  Obsolescence as Opportunity: A Case for Adaptive Reuse of Century Old Industrial Architecture in Saint John, New Brunswick which involves the conservation and adaptation of a vacant warehouse. “The purpose of my research is to offer a tool kit for approaching design in smaller, historically significant urban spaces. While a specific approach would need to be individually developed for use in alternate locations, the broader strategies discussed in my research can be generalized across varying contexts. Specifically, it posed the question: How can adaptive reuse methods be tailored to small-scaled turn of the century industrial architecture, and be tested in small urban centers?”

Hamilton believes the retention and conservation of buildings from society’s collective past can promote urban strengthening, encourages revitalization, plays a role in developing sustainable communities, as well aids in the linking a city’s past to its future. “There are opportunities to bring old buildings back into a new history rather than ultimately wasting an opportunity that would allow for the reintegration of life into a forgotten piece of time.”